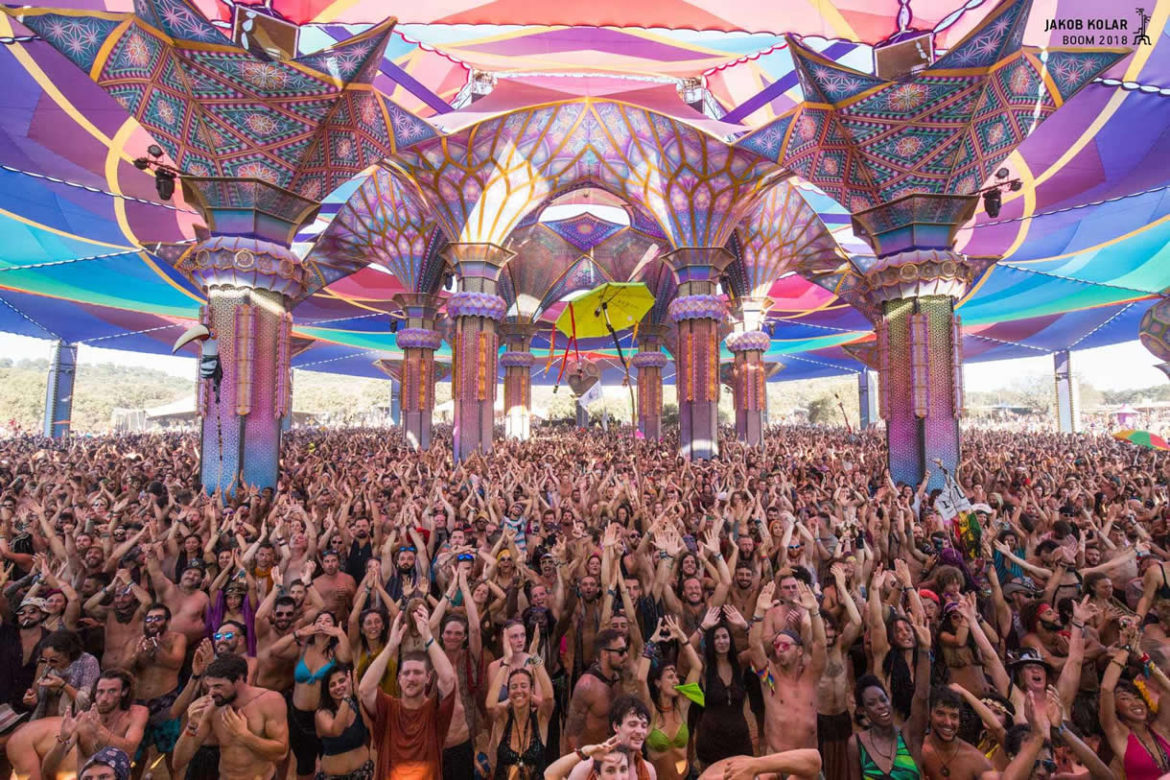 Due to the Covid-19 pandemic, Boom Festival has been postponed to August 22 – 29 July 2022. See the Boom Festival page for the official statement and more details.

Boom Festival: The Mecca of Psytrance

Anyone that’s into the psytrance scene has certainly heard of Boom Festival, one of the largest music festivals in Europe and, probably, the most famous psychedelic trance festival in the world.

Boom Festival is a biennial psytrance music and culture festival and it happens on August’s full moon. Located right in the middle of Portugal, the country that’s frequently called the Mecca of psytrance, Boom counts with a variety of visual exhibitions and great music performances, group activities, workshops, and stations, all of this in one magical place surrounded by nature and great energy.

Boom Festival has a truly humble beginning. It started back in 1997 as a small psytrance festival in the middle of a forest in Portugal. Today, the festival has grown to around 50.000 visitors (or Boomers) per edition from all over the world, making it one of the biggest international tribe gatherings.

What started as a simple festival has turned into more than that – a way of living. Every two years, Boomers gather on that particular place in space and time and experience a great atmosphere filled with culture, art, music, and self-sustained living. Almost like an alternate reality composed by people of all sorts of ethnicities, nationalities, gender, ages, together as one.

In the words of one of Boom’s founders: “Boom is not only a festival, but it’s also a state of made, inspired by Oneness, Peace, Creativity, Sustainability, Transcendence, Alternative Culture, Active Participation, Evolution, and Love.”

In 2004, Boom Festival started a series of self-sustainable projects which included: toilets with no chemical products; the use of natural and eco-friendly resources like the wind and solar energy; recycling policies; the treatment of residual waters using biotechnology; and even the distribution to participants of free supplies of cleaning kits with pocket ashtrays and rubbish bags.

Boom’s environmental-conscious policies have gained international recognition, and this psytrance festival has even been awarded the Greener Festival Award for several years.

In 2011, Boom also won the title of YOUROPE Green ‘N’ Clean Festival of the Year for the second year in a row.

Boom’s eco-impact was so big that the United Nations invited the festival’s team to use their musical popularity to raise awareness in a program called United Nations Music & Environmental Initiative.

Another particularity about Boom Festival is that it does not believe in corporate sponsors. The festival is entirely funded by ticket sales and there’s no “visual pollution” like marketing.

Boom is not only about psytrance music and unique artistic designs; it has a soul of its own, a consciousness for all living things and the world that we all share.

The Perfect Mix of Music, Art, and Culture

Boom Festival is a unique experience for anyone who dares to enter its psytrance universe fusion of music, workshops, film screenings, yoga, fire performances, group meditations, visual exhibitions, and art galleries with the surrounding wilderness and nature. This powerful combination results in a beautiful, magical, and truly transforming experience.

Today, Boom Festival is made up of five stages:

Besides this, the site is filled with mind-blowing attractions like sculptures, art installments, street theaters, and fire performances.

There’s also the Liminal Village, a place for different group activities such as yoga classes, lectures, film screenings, group meditations, and discussions. Another curious zone is The Healthy Area, which provides a safe and calm environment with group workshops for healing techniques, a pool for water therapy, and a massage area.

Boom Festival is a magical dimension of its own; a universe waiting to be discovered and explored, and where one’s life will never be the same.

Boom Festival is held at the following location:

Boom Festival’s site (Boomland) is located in Central Portugal, in Idanha-a-Nova, district of Castelo Branco. It’s near the border, and roughly 250km off Lisbon, the Portuguese capital, and 350 km off Madrid, the Spanish capital.

Boomland is located amidst a beautiful ecosystem of holm oak grove next to a magical lake that covers most of the area. The place has a mystical aura, and its almost surreal landscape and wild nature come together to create an amazing feeling of freedom.

When the sun goes down and disappears behind the mountains there’s a sense of being lost in space and time, and only who has been there can understand the meaning of these words.

Boom Festival also offers some unique views over a Portuguese historic village called Monsanto, which lies in the Geoparque Naturtejo – an area classified by UNESCO due to its cultural heritage, geological riches, and nature.

Where is Boom Festival located?

The Boomland is located in a beautiful prairie in Central Portugal, in Idanha-a-Nova. The site is around 250km off Lisbon, the Portuguese capital, and 350km off Madrid, the Spanish capital.

How big is Boom Festival?

Boom Festival is one of the largest transformational psytrance music festivals in Europe, having a capacity of around 50,000 participants from everywhere around the globe. The festival is also the most famous psytrance festival in the world.

How do I get to Boom Festival?

You can get to Boomland either by bus, which is the most optimal way to help us decrease our carbon footprint, or by car.
There’s an official Boom bus from both Lisbon and Madrid Airports, and various points in France, Belgium, and Switzerland arriving directly to Boomland one day before gates open.
There’s also a shuttle from Castelo Branco that will drop you directly in the site, and vice-versa.
For more information on the bus/shuttle, or to post/check car sharing/lifts, check the Boom Festival official website.

How long is the festival?

At Boomland you can find chemical-free toilets, private showers, a community kitchen for everyone, food trucks, camping material services, cardboard tents and sleeping kits available so you don’t need to bring/pitch a tent, a free camping area suitable for everyone, Tipi (Wanbli) camps options, workshops, and all kinds of stations.
There is also a Special Needs Service for Boomers with disabilities and a kid’s area for children between 3-12 years old called Young Dragons Area.

Note: Everyone can take part in the many volunteer projects and job-openings available during the festival.