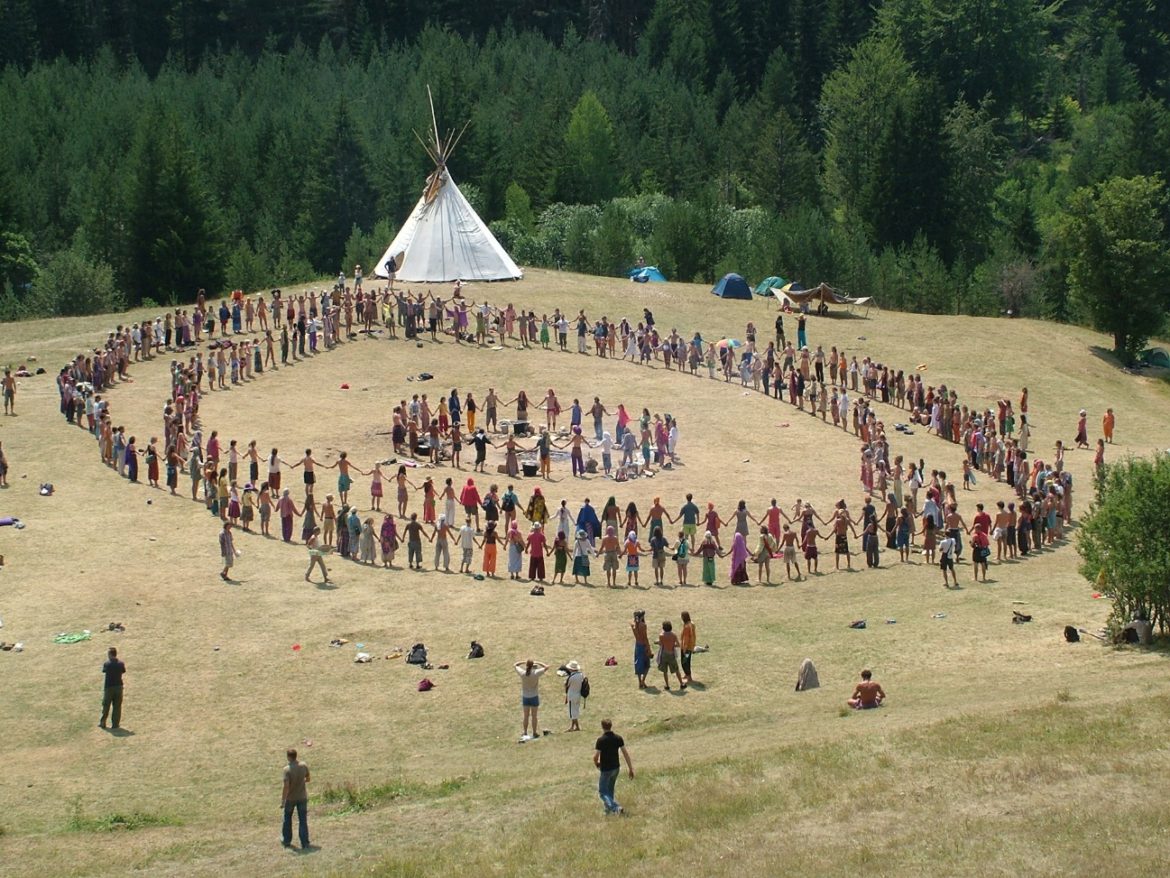 The World’s Most Famous Gathering

Rainbow Gathering is not your typical psytrance event. Rainbow Gathering, as the name suggests, is a utopian inspired gathering of international people who share the same ideals.

Rainbow gatherers meet somewhere around the globe every year, usually in remote forests or other places, to escape modern society, capitalism, and materialism, in an atmosphere of pure unity and peace. Gatherers sing, dance, cook, share experiences, attend workshops, and much more, all in the spirit of one giant family.

There’s not just the one Rainbow Gathering, but dozens of events spread all over the world, so no matter where you’re located, it’s very probable that there’s one happening near you. There’s also the biggest, and major, of all gatherings, named World Rainbow Gathering.

Rainbow Gathering is a gathering of loosely knit communities brought together to hang out, live, and share ideas of freedom, peace, and harmony, in a connected familiar atmosphere around nature. Some gatherers also believe it to be a manifestation of a bright new consciousness, almost as if they’re a tribe ready to begin a New Age on the planet, that way gratifying ancient Hopi Indian prophecies.

Rainbow Gatherings are distinctive events, and one of their kind. There’s no commerce nor alcohol available, and there’s no one in charge; a real utopian world. One thing is often heard in Rainbow Gathering: “if you see a job, it is yours!”, and that’s the way things work there.

Rainbow Gatherings usually last for a whole month, that way coinciding with the moon cycle, but this number changes within individual gatherings, and has been expanding ever since its beginning. There’s no official festival site as it always happens in different places, and it is held all over the world (mostly in USA and Europe).

Rainbow Gathering is divided into smaller regional/national events, spread throughout the world, and bigger events such as the European Rainbow Gathering (which happens in a different European country every year).

The major of all events is considered to be the World Rainbow Gathering, which has already been held in countries like Brazil, Thailand, China, New Zealand, or Ethiopia.

Before thinking on participate in a Rainbow Gathering, note that the event has no leader, hierarchical structure, spokesperson, or membership. Rainbow Gatherings are ruled by love, non-violence, non-consumerism, volunteerism, and multicultural diversity. Also, don’t forget that using money at the gathering is taboo.

It all started with the original invitation for the first gathering, that spread through the USA in 1971, where the “Rainbow Family Tribe” referred to themselves as “brothers and sisters, the children of God”, “Families of life on Earth” or “Children of Humankind”. In this invitation, all nations, races, politicians, and so on, were invited to reach an agreement where peace could be achieved between all human beings. To create a more satisfying culture (as they believed) without capitalism, consumerism, and mass media – a utopian nonhierarchical system promoting world peace, and which would serve as an example for the transformation of the mainstream society.

Rainbow Gathering is mostly influenced by the 60s counterculture and follows an ideology of non-commercial festival – a “revitalization movement” embracing philosophies and practices with historic utopian roots in the mid-19th century.

Unfortunately, these values are starting to get left out. In the last decades, there have been several criminal incidents at some events, with some organizers stating that the main principles of Rainbow Gathering had been forgotten and that the gatherings were turning more mainstream in an attempt to attract more people.

The History of the Rainbow Gathering

The first Rainbow Gathering of the Tribes took place in 1972 in Colorado, USA. It was a four-day event put together by youth counterculture “tribes” from Northern Carolina and the Pacific Northwest. This event was attended by more than 20,000 people.

Despite the original intention of this being a one-time thing, a second gathering took place in Wyoming in the following year, and the Rainbow Gathering ended up being declared an annual event.

The length of Rainbow Gatherings has been expanding ever since the four-day first gathering, as well as the number and frequency of the events.

Since the 80s, the media coverage of Rainbow Gathering has been unfavorable, with journalists describing Rainbow Family members as “aging hippies”, “middle-aged white folks”, or “grown-up flower children”.

In the 2000s, media focus shifted to crime incidents in the local communities near the gatherings, ranging from violent assaults and retail theft to serious traffic charges or driving under the influence, attributing all these to Rainbow Gathering participants.

Despite the movement’s ideology and pacifist aspirations, the media usually portray participants with a reputation of drug and alcohol abuse, disruptive and criminal attitudes, and cultural appropriation and misrepresentation of the Native American beliefs.

Unfortunately, this resulted in an increased police presence at the events, and poor reception from community members and business owners at the regions nearby. These issues are contributing to the decline in attendance at Rainbow Gatherings in the USA.

Rainbow Gatherings are truly unique and transformational experiences and no matter where in the world, they all follow the same principles of love, unity, and freedom. For one full month, a remote forest becomes a real utopian world and everyone should experience it at least once.

The exact location of Rainbow Gathering is tricky to define because there isn’t one specific place where the gatherings take place. Ever since the Rainbow Gathering started back in 1972 in Colorado, USA, it has been changing every year.

In the USA, however, all Rainbow Gatherings happen in or around National Forests.

There are also annual European Gatherings and World Gathering, in different countries every year, as well as smaller National and Regional events.

All events follow the same spirit, and usually happen in a remote location free and away from modern society. And that’s what makes Rainbow Gathering so intense and unique.

❓ Where is Rainbow Gathering located?

Not only Rainbow Gathering doesn’t have a fixed location, but it also happens everywhere around the world. Though you can expect it to be in a remote and secluded location, surrounded by nature and away from the civilized world.

❓ How big is Rainbow Gathering?

Rainbow Gathering doesn’t have any limitation on participants’ capacity, and it has held over 30,000 gatherers in many events. Again, it will all depend on the type of event you will participate, and attendance varies from location and type of gathering

❓ How do I get to Rainbow Gathering?

It all depends on the type of event you’re attending and its location. The best option is to search in forums online, where many participants post tips and recent info on the next events. Usually, there’s no such thing as shuttle services, so you will be expected to go there at your own means.

❓ How long is the gathering?

❓ What are the facilities available at Rainbow Gathering?

Facilities vary from event to event, but you can expect camps and kitchens based on regional, spiritual, and dietary commonalities. There’s bread, snacks, tobacco, and related products available, as well as meaty, vegetarian, and vegan options. There are filtered drinking water devices, although gatherers are encouraged to boil drinking water.

Sanitation has always been a major concern and its usually inadequate. There are always a group of doctors at the event to assist any participant and small first aid stations around the site.

There’s usually something like a Kid’s Village, for participants with children, a Jesus Camp for religious people, and all sorts of different areas, depending on the event.

At last, all responsibility and security issues, conflict resolution, and emergencies are handled by Shanti Sena (peace army).