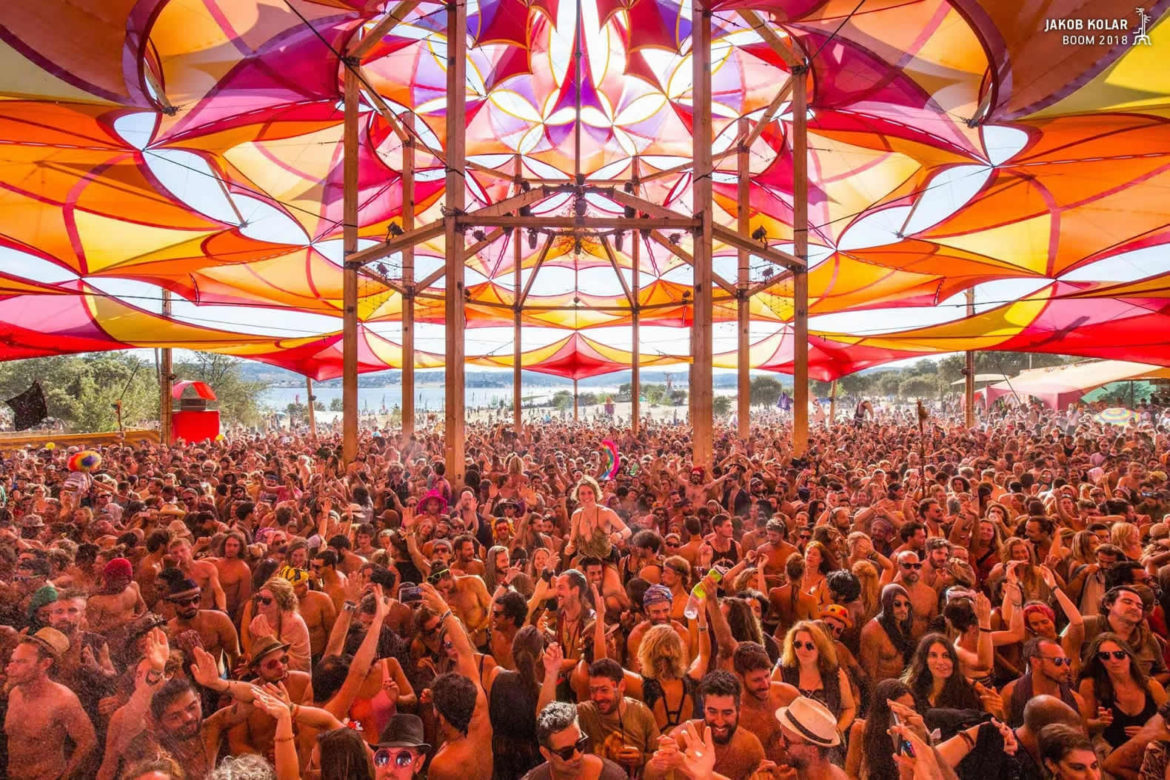 Best Psytrance Festivals Around the Globe in 2021

The year 2020 has seen the entire world come to an abrupt halt as COVID-19 takes its toll, and the festival world has been devastated in the process. The global pandemic has just about wiped the entire festival calendar clean; forcing almost all music festivals to be postponed or cancelled. As a result, everyone from artists to festival organizers, production crew and more have been put in an extremely difficult situation with no clear end in sight.

Despite these uncertain times, the psytrance community has come together to support one another more than ever before. Regular live streams, broadcasts and virtual events have become the new norm and continue to connect people all over the globe.

As the world works together to overcome the pandemic, festival organizers are eagerly planning their return. Here are 10 psytrance festivals to look for 2021!

Boom Festival is one of the biggest and best psytrance festivals in the world. Taking place in Portugal every two years, 50,000 visitors from more than 150 different countries take part in the unique spiritual experience.

The festival made the decision early on in the year, to reschedule the event due to the uncertainty of this year’s festival season. Boom Festival will now take place from July 22-29, 2021.

All tickets, as well as services such as camping and transport will remain valid for the upcoming edition. As the festival relies on revenue to survive, refunds are unavailable; however, a third-party platform will be enabled in the future for anyone unable to attend to safely sell their ticket.

Further information about the upcoming event will be released on their official page.

Psy-Fi Festival is an annual music and art gathering in the Netherlands. The relatively new event has quickly grown to become a renowned psytrance festival, with international visitors making up 80% of the attendees.

This year’s edition was unable to go ahead as the Dutch government banned all events in the Netherlands until September 1st. The festival is now scheduled to take place from August 25-29, 2021.

All tickets can be transferred to a voucher valid for next year’s edition; however, the festival encourages ticketholders to donate the value of their ticket to ensure the future of Psy-Fi. There is also a donation link to contribute towards keeping the community and festival alive. Full or partial refunds are also available, however, in accordance with Dutch regulations, the amount will not be issued until September 2021.

Stay updated on the future edition via the festival’s official page.

O.Z.O.R.A Festival is one of the most influential psychedelic trance gatherings in the world. Based in Dádpuszta, Hungary, the seven-day event annually takes place during the first week of August and welcomes more than 30,000 visitors.

This year’s edition was unfortunately forced to cancel as the Hungarian government banned all gatherings above 500 people until at least August 15th. The next edition will now take place from August 2-8, 2021.

All tickets purchased for this year’s edition will be automatically valid for the next festival. Refunds are unavailable, however, visitors who are unable to attend next year’s edition can transfer their ticket to someone else via the festival’s official ticket transfer request form.

You can stay updated on the upcoming edition via their official festival page.

The annual summer VooV Experience was forced to cancel as Germany banned large gatherings until the end of October. The organisers are still optimistic and looking to hold an alternative event later in the year but there is no confirmation thus far.

All tickets will remain valid for next year’s edition, which will take place from July 23-26, 2021. Refunds are available in the form of a voucher, which can be used to purchase merchandise from the festival’s online shop.

Stay updated on the upcoming edition via the official festival page.

The ZNA Gathering is a biennial psytrance festival in Portugal.

The ZNA Gathering is much more than your usual psychedelictrance festival; it’s a retro-futuristic celebration, a universal meeting point for both old and new school trance lovers. A place where everyone is connected through dance, good vibes, great energy and, of course, beautiful music. Mix this amazing atmosphere with a spectacular outdoor scenery, also known as the ZNA Land, and you have everything you need to turn this powerful recipe into one of the world’s best, and certainly the most unique, psytrance festivals in the world.

Indian Spirit Festival is an annual psytrance festival, which closes out the summer festival season. Taking place in Northern Germany each August, the five-day event offers a unique spiritual journey for 10,000 local and international guests.

2020 edition was unable to take place as all large gatherings were banned in Germany until October. Indian Spirit Festival will now take place from August 26-30, 2021. All tickets will remain valid for the 2021 edition and ticketholders are encouraged to keep their ticket. If you are unable to attend, the festival is able to offer a long valid voucher, which can be redeemed until the end of next year for Indian Spirit Festival or any other events by the organisers.

The festival organisers were able to secure the majority of this year’s lineup for next year’s edition; including popular acts such as Ace Ventura, Captain Hook, Infected Mushroom, Neelix and many more.

You can find the full lineup so far here and stay up to date on the upcoming edition on the official festival page.

Burning Mountain Festival is an annual psychedelic arts and music festival in Switzerland. The four-day event offers a unique and magical experience in the heart of the Swiss Alps.

This year’s festival was postponed due to the ban on events by the Swiss Federal Council. Burning Mountain Festival’s 10-year anniversary edition will now take place from June 24-27, 2021.

All tickets will remain valid for next year’s edition and the festival encourages ticketholders to keep their tickets. Refunds were made available until the end of May 2020.

Information about the lineup, tickets, travel info and more will be released shortly and can be found on the festival’s official page.

Momento Demento, alternatively referred to as MoDem Festival is an annual psychedelic music and arts festival in Croatia. The seven-day event promotes underground psychedelic sounds to thousands of visitors each year.

Due to the current global pandemic, the festival was forced to reschedule to the summer of 2021. MoDem Festival will now celebrate its 10-year anniversary from August 9-15, 2021. A crowdfunding campaign by the event recently raised more than €100,000 to upgrade the festival experience for the upcoming edition.

All tickets will be automatically valid for the next edition and ticketholders will be personally contacted by the organisation via email. Ticketholders also have the option to request a refund. More information about the upcoming edition, including the lineup, is anticipated to be announced early next year.

Stay up to date with Modem Festival via the official festival page.

Organik is a biannual psytrance gathering that takes place in the South African capital of Cape Town. The open-air event has grown to become one of the country’s most respected festivals; hosting the ‘Love Project’ in Autumn and the Gaian Dream’ in Spring each year.

The Love Project event was unfortunately forced to cancel five days before it was due to start because of COVID19 restrictions in South Africa. There are currently no future editions of Organik scheduled.

Due to the financial burden of the cancellation, the festival was only able to offer partial refunds; however, the majority of ticketholders have shown their support for the Organik team by not requesting refunds.

You can stay updated about future events via their official page.

Eclipse Festival is an annual arts, culture, music and spirituality festival based in Quebec, Canada. Taking place at the end of July each summer, the five-day event offers a unique transformational experience to all its local and international visitors.

This year’s edition was postponed 15 months due to government restrictions and will now take place from July 22-26, 2021.

All ticketholders can support the festival’s return by keeping their ticket for the upcoming event or request a refund. The festival aims to preserve the musical program from 2020 for the upcoming edition and updates will be shared throughout the year via their official page.

Regardless of the uncertainties, the psytrance community remains stronger than ever. Plenty of major event organisers have already begun planning festivals for 2021 and many donations and successful crowdfunding campaigns have helped ensure these events will return better than ever.

The upcoming festival season already features a multitude of popular events. Among the 2021 schedule, we will see renowned bi-yearly festivals Boom and ZNA take place in the same year; alongside the likes of O.Z.O.R.A, Indian Spirit and many, many more.

Although 2020 festival season took a drastic turn, we look forward to gathering together again soon and celebrating the world overcoming the pandemic.

We are looking for passionate writers who love psytrance and showcase your love of psytrance to our community! Tribal Reunion was created by the community, for the community. Our team is made up of avid festival goers who live and breathe music festivals and we want you to be a part of it!