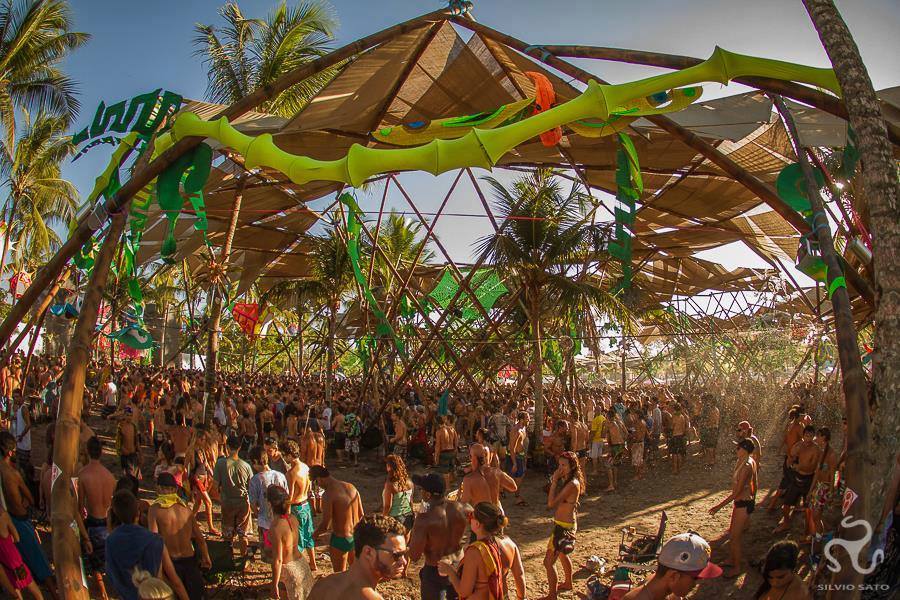 The Heart of the Brazilian Tribe

The Universo Paralello festival (roughly translated to Parallel Universe festival) is the heart and soul of Brazilian Psy-trance community, which lasts for nine full days of non-stop music. It’s also one of the most international festivals in the country, and one of the largest alternative culture festivals in all South America.

Universo Paralello happens every two years, right on the height of Brazilian summer (usually starts a few days before New Year’s Eve and ends in the following year), in the most perfect location for the effect – the stunning Praia de Pratigi, a hidden oasis on the Southern beaches of Bahia.

The Universo Paralello festival is much more than a simple psychedelic trance music festival – it is an international gathering of people from different styles and cultures, all together to celebrate Peace, Love, Union, and Respect. The festival features several stages but also a bunch of transformational activities. It offers visitors workshops, performances, holistic therapies, artistic and cultural ceremonies, and many more, aiming to give people the tools so they can become more aware and help in the path to transcendence.

Universo Paralello also has a strong belief in sustainability and environmental management, and there’s a real effort by the organizers to not damage the local surrounding nature.

Universo Paralello started at the beginning of the new millennium as a small party in the Brazilian mountains of Planalto Central. The first events were small, gathering just a few hundred people from around the country, and despite having changing its location and growing hugely since that humble beginning, the essence of this psytrance festival stayed the same – freedom, connection, and peace.

The festival turned to a bi-annual event in 2011 and is today one of the biggest psytrance events in Brazil. It has already seen 13 editions.

The festival doesn’t just focus on psytrance music; in fact, it features a huge variety of musical styles, ranging from Electronic and Dance Music to other distinct genres, like Reggae or Rap. Universo Paralello has seven different areas and six different stages.

There’s a huge amount of other activities going on during those 9 magical days, such as slackline, yoga classes, juggling, drug awareness, healing spaces and therapies, cinema, theater, art exhibitions, performances, workshops, talks, and so much more.

Universo Paralello is destined to everyone from everywhere, from young to old people, from single people to whole families, and everyone in between.

Since its inception 20 years ago, the concept of Universo Paralello has never been more current, and indispensable.

Everyone is invited to dive into this parallel reality; a reality where the ritual of Unity and Love combine with the best music resulting in a rare and unforgettable experience.

The Universo Paralello festival is held at the following location:

The Universo Paralello festival takes place on a stunning location at Pratigi Beach, in Ituberá; a hidden oasis on the Southern beaches of Bahia, Brazil.

Ituberá is the festival’s main support city, where gatherers will find ATMs and banks, a hospital, pharmacies, gas stations, supermarkets, hotels, the post office, restaurants, among many other services.

The weather there is very hot and humid, as you can expect on a beach at the peak of the Brazilian summer, so be prepared.

❓ Where is Universo Paralello located?

Universo Paralello is located in a stunning beach called Praia de Pratigi, in the small municipality of Ituberá, in the state of Bahia. The festival site is deep within the beauties of the Atlantic forests and beaches of Southern Brazil.

❓ How big is Universo Paralello?

Universo Paralello is one of the biggest psytrance events taking place in Brazil, with the last editions registering an attendance of 20,000 people from everywhere around the world. The festival is very international, and there’s also a huge diversity of age – it is a gathering for everyone and everyone feels included. Despite its big size tickets usually sell out very fast, so be extra careful (if you happen to miss it, the next edition is only in two years).

❓ How do I get to Universo Paralello?

You can get to Universo Paralello by bus or by car. There’s a charter bus service that provides a safer, more comfortable, and sustainable festival experience, from the Valenca Airport and Salvador Airport directly to the festival site, and back. Check out the bus pricing list and other detailed information on how to get there on the Universo Paralello official website.

The Universo Paralello festival happens once in every two years. The festival lasts for nine days and eight nights; nine whole days of a truly wonderful and transformational experience that will surely have a great impact on your life. On top of this, Universo Paralello always falls over New Year’s Eve, so do you want a better way to celebrate it?

❓ What are the facilities available at Universo Paralello?

At Universo Paralello you will find everything to give you the best experience possible. Here is a list of most of the facilities available there: