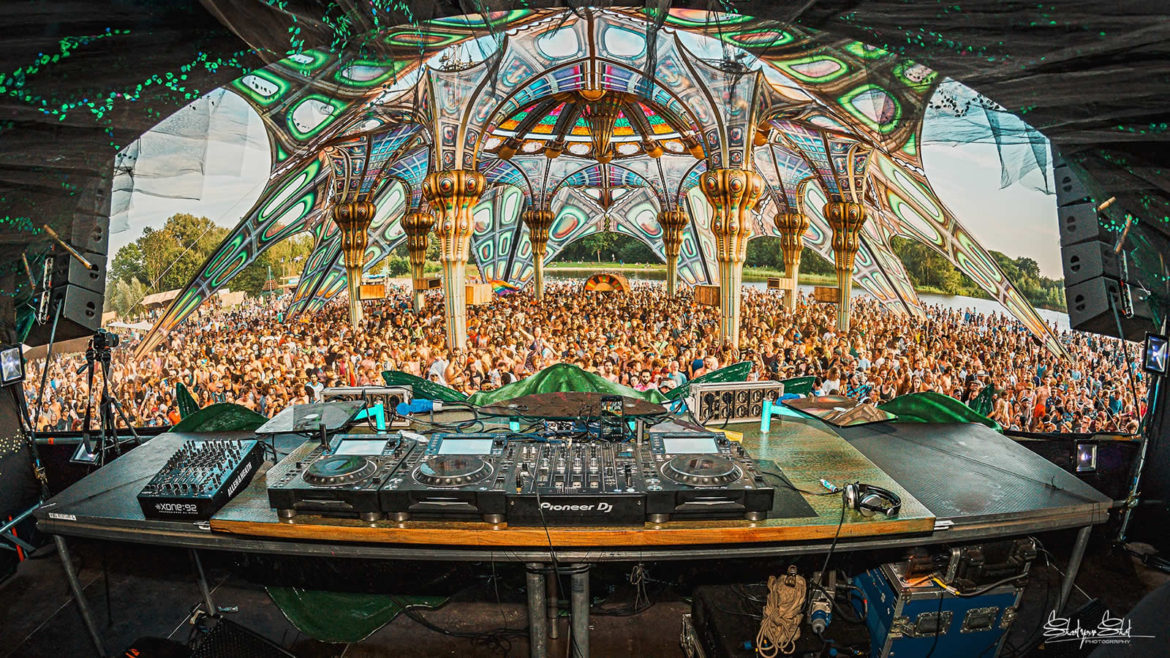 Psy-Fi festival 2021 has unfortunately been cancelled due to COVID-19 situation. Read the full cancellation statement from the Psy-Fi team here.

Psy-Fi Festival is an annual psytrance music, culture, and arts festival in the Netherlands. Since its inception in 2013, this psychedelic trance festival has amassed a great following. What started as a small music festival has grown to be one of the largest international festivals in the Netherlands, and it attracts thousands of psylovers each year.

Psy-Fi is not only known by its amazing atmosphere and music but also for its international reach; people from all over the world get together every year in what is best described as a universal psytrance gathering, a melting pot of psychedelic culture lasting for a full week.

Psy-Fi Festival is also special for its inspirational mission; participants can attend many different workshops and lectures on a variety of topics, and take their newfound knowledge to their everyday life in the hopes of building a better world.

Psy-Fi Festival, despite its young age, is on the path to becoming one of the biggest psytrance festivals in Europe. The event, which lasts a whole week, offers its participants a large (and great) variety of arts, music, and space for personal growth.

In the words of the organizers, “bigger is not always better”, and that’s the spirit of the festival. Instead of trying to grow, they focus on delivering the most fulfilling festival experience they can. They feel that the learning experience is extremely important and they encourage everyone to integrate what they learned on the festival into their daily lives.

Of course, they also aim to provide the festival-goers with the best line-ups possible because, at the end of the day, everyone’s there for the music.

When people enter alternate realities through music, psychedelics, meditation, or any other means, are these experiences sci-fi (or psy-fi), or are they just as real as their ordinary state of reality?

That is one of the biggest questions of the whole psychedelic experience, and Psy-Fi Festival tries to give its participants the necessary tools and environment to answer it.

At the Psy-Fi Festival, people are encouraged to experience these “other states of reality”, and try to find the answers. The Psy-Fi team is sure that with the help of the best-known DJs and live acts in the world, amazing art, and great ambiance and energy, people will surely understand more about these altered states.

Mission: A Higher Level of Consciousness

Psy-Fi Festival’s mission is to create a space where visitors can enjoy music, culture, art, personal growth, and nature. To build a place where people can cooperate, and where people of all countries, cultures, religions and any other labels can meet and be as one.

The focus of this unique psytrance festival lays in the psychedelic subculture, a culture with great core values such as unity, peace, love, and respect. To create a higher level of consciousness amongst the visitors through their programs, and in the end, that the participants can integrate a piece of this experience into their daily lives and back into society, where they can become an example to others.

Despite being recent, the Psy-Fi Festival already has a lot of history.

The first festival was held at a different location, the Stadspark of Groningen, in 2013. The organizers have always been a part of the big psytrance family and traveled all over the world to visit festivals and gatherings. Soon they decided it was time to create their psytrance festival back in the Netherlands, following a specific mission. They felt it was their duty to contribute to the worldwide tribe themselves. They also agreed on the beginning that they would never want to make money out of it. They worked with all their heart, soul, love, and passion, just for the scene.

All the money made from selling tickets would directly be invested in the next festival, so that way they could keep the entry fee as low as possible.

Psy-Fi Festival grew up each year, with more and more people coming. In the meantime, they changed the location (to the current one, near Leeuwarden), and they have proudly watched Psy-Fi becoming one of the most international and inspiring psytrance festivals in the world.

Today, Psy-Fi Festival is characterized by its inspirational message, great energy, and also for its layback attitude and open-mindedness. The festival is often described as a calm and relaxed festival, where everyone can just sit and chill. It’s a place where people can personally grow, surrounded by magical scenery and the best of the vibes.

Psy-Fi Festival is also a very eco-friendly festival, and the Psy-Fi team tries its best to do it the “greenest” way they can. Prohibiting the sale of single-use items to reduce waste, prohibiting the sale of meat on the festival, and even giving free tickets to everyone that rides a bicycle to get there (Psy-Fi by Bike program) are amongst the festival’s great initiatives.

The festival also has a very liberal policy regarding drug use and it’s one of the few festivals around the world where legal psychedelics are sold.

Psy-Fi Festival is so much more than just great music; it’s about connecting people from all over the world in a transcending experience, no matter what race, country, gender, or religion.

The Psy-Fi festival is held at the following location:

Psy-Fi Festival is located in De Groene Ster, near the city of Leeuwarden, Netherlands. The festival happens immersed in nature, on a clearing of green grass completely surrounded by luxurious trees. There’s a small and mystical-feeling beach (small note: this is an official nude beach) on the nearby lake, and the whole area is sprinkled with bodies of water, where participants are invited to swim.

The involving landscape is breathtaking and has a feeling of a place forgotten in time, far away from the world and all its craziness. In the end, it’s just the perfect place for the feeling of love, peace, and relaxation that the festival tries to pass.

Psy-Fi Festival is divided into several different sections, one of which is called the Sacred Island, where most of the workshops and lectures take place.

❓ Where is Psy-Fi Festival located?

A: Psy-Fi is located in De Groene Ster, near the small city of Leeuwarden, in the Netherlands. The site is around 150 km off Amsterdam, the country’s capital city.

❓ How do I get to Psy-Fi Festival?

You can get to the Psy-Festival by car or bus. There’s a charter bus service that provides a safer, more comfortable, and sustainable Psy-Fi experience, from the Amsterdam Airport directly to the festival site, and back. There’s also the Psy-Fi by Bike program, which offers the festival ticket to everyone that makes more than 200 km by bicycle to get to the festival
Check out all the info on the Psy-Fi Festival official website.

Psy-Fi Festival happens every year. The festival usually lasts for 5 days and 5 nights, but you have the opportunity to camp for 9 days.

❓ What are the facilities available at Psy-Fi Festival?

At Psy-Fi Festival you’re going to find medical/bad-tripping care available, free drinking water on-site, hot/cold showers, free electronic device charging, van/caravan friendly places (which you have to buy a special ticket to use), a free camping area, toilets, and multiple garbage bins.
There’s available a Tipi Camp (Festipi) featuring beautiful canvas bell tens, well-equipped with pillows, mattresses, bedsheets, and sleeping bags. On the other hand, you also have a low budget tent renting service option (Kartent) with all the camping gear you might need.
There are also lots of food stalls and trucks (all vegetarian/vegan), workshops, massage stations, and all those things that make Psy-Fi Festival one of the most unique psytrance festivals in the world.

❓ How big is Psy-Fi Festival?

Psy-Fi Festival has the maximum capacity of 15,000 visitors, which is usually sold out. Most of the participants are from other countries, with the last edition having seen visitors from 116 countries. This truly unique psytrance festival is characterized for its internationalization, and despite its middle-high attendance, people still feel a cozy and familiar environment.